I'm contemplating assembling a kit amplifier and am open to suggestions and comments.
A couple of ones that have caught my eye are 5E3s and Princeton Reverbs.
I've never built one, but have done work on my Bassmans and Showmans.
Top

You can build a kit with some moderate prior experience with working on tube amps. The main thing is safety of course. These have voltages in them that can kill you if you aren't careful, and given the time a kit takes to make, your construction of it will likely not be done in all one go. So you need to make sure you double and triple check all connections, especially the power supply. It is also very useful to bring an amp up for the first time on a variac with a light bulb current limiter in case of problems with your build.

All kits are not created equally. The Weber kits are the cheapest price-wise for the most part, but the assumption is made that you know what you are doing and there are no instructions. Some of the hardware is cheap and you can upgrade with good quality stuff and get a better amp. For 5E3's the Mission Amp kits are probably a better choice though unless price is your main consideration. The Mission amp kits come with instructions and are well done. You could also consider a Mojo kit...they seem to be pretty well done.

The Princeton seems similar to the other amps you mentioned that you have worked on already. The 5E3 would give you different sound. I own a 1956 5E3 and if given a choice between that and a Princeton Reverb, I'd choose the 5E3 myself. The tweed style chassis are a bit harder to work on than the blackface style amps but either one is likely a good project. You might want to build a little Champ style amp first though as it is simpler. As with all tube amps grounding and proper soldering and wire routing are very important. If you go with the random chassis grounding of the vintage amps, it will likely work similar to vintage amps, but if you take a little time to improve the grounding you will get better performance with different grounding systems such as Kevin O' Connor's Galactic Ground system.

Greg,
Thanks for the good advice.
Weber's lower costs dissipate if more is to be spent on better components, but it's also hard to justify a C note or so for a set of destructions. That being said, it could be considered as insurance.
If I get my feet wet with a Champ, it'd probably be a Weber. I've assembled 2 load/line attenuator kits from them, without instructions.
Mission's limited offerings look good, but ordering would seem to be difficult.
Mojotone would probably be a first choice, and has the options of ordering direct or Reverb.com.
Stewmac has offerings, but those look like Mojotones with a huge markup They're out of the running.

so the project's been put on back burner for this year.
Top

I decided on a 5E3 from Ted Weber, as they had a Christmas sale on, with a discounted price.
Stated lead time for kits is approximately 2-3 weeks mine shipped one day under 3 weeks.
It was short 3 critical parts, I notified them and they promised to send them right away.
Somebody dropped the ball, they hadn't arrived in a month, so I bitched, and they apologized and sent them the next day.
By following the layout diagram available on line, and being very careful and checking and rechecking I ended up with a nifty l'il amp.
It powered up clean, with no sparks ,smoke or hums. I'll play with it for a while, then probably try to sell it.

Princeton Reverb's next, but not right away. Weber's TOS on them.
Top

It has a defective design, as the controls interact in a detrimental way. There's a mod or two for that.
It breaks up too quickly for my taste, but after consulting a schematic for the original '57 Deluxe,I've subbed a 12 AY 7 in V1 position. Might also try a 12AU 7, but I don't have one on hand.
Top

"Defective" might be a bit harsh. The preamp design is crude by modern standards (heck, it was crude compared to other amps Fender was making in mid-1955), but I admire how Leo Fender was able to offer two channels and a tone control with an absolute minimum of parts. The vast majority of our Rickenbacker guitars and basses have that same "backward" wiring of the volume controls in order to mix the pickups together when more than one is selected.

With regard to that abrupt volume change on the amp controls, players of those early amps were expected to control the volume and tone from their guitars as well, and players since have discovered some neat tones by adjusting the volume of the channel they're not plugged into.

That said, building these circuits allows for a neat glimpse into the past, but I wouldn't judge anyone for tweaking their 5E3 build to act more like a modern amp. Simply adding 220k mix resistors and rearranging the volume/tone control wiring per the 6G3 Deluxe would give you less interaction and a more usable sweep of the volume controls. That might be sufficient, since a lot of the appeal for these amps is that they offer a lot of gain and breakup at non-insane volumes. You might even consider putting the 12AX7 back into V1 for a little more raunch!

As it's been a couple months, have you tried any mods yet, or are you still mulling it over? If it's still pretty much stock, there's the option of selling it off as-is, and building a BF Princeton or Deluxe clone next. Now you've got some experience building from scratch, and the BF sound may be more to your liking anyway.

Thanks to the panpanic of 2020, I've had no chance to take the Deluxe out 'n about, to see how well it performs in a club setting; a blues jam would also have let other's give it a try and offer opinions. I've given it some play time at home; still not sure if the speaker has broken in, but I DO like the Weber 12A125 that's in it, so far.

Weber had a fall sale, so I ordered the 6A14 with 10" speaker.It took nearly a month to arrive; and as with the 5E3, it was missing parts too--some that were on the b.o.m but were MIA.

I could see missing a resistor or 3, but missing the power transformer? Phrrr...
It is a more complex amp, but the chassis is not as cramped as the channel style one of the tweed amps, so final assembly went fairly smoothly.
Power up, and no sparks and smoke,YAY! Also, no sound. BOO! There are some cross connects on the layout diagram which are noted by letters; I'd missed the Y lettered jumper. Adding that brought on sound. YAY! No vibrato! BOO! One broken short jumper to find and fix.
Vib works, Rev works, it passed a 4 hour on test, so final assembly into the cabinet. I'll put some time on it, but what with no gigs,no bars etc, it'll be "all dressed up and nowhere to go".
And after all this, I've set my eye on a 6A14 HP, for the next go around.
Top

I found a good deal on a cradle, in a closeout sale. It surely made assembly much easier: 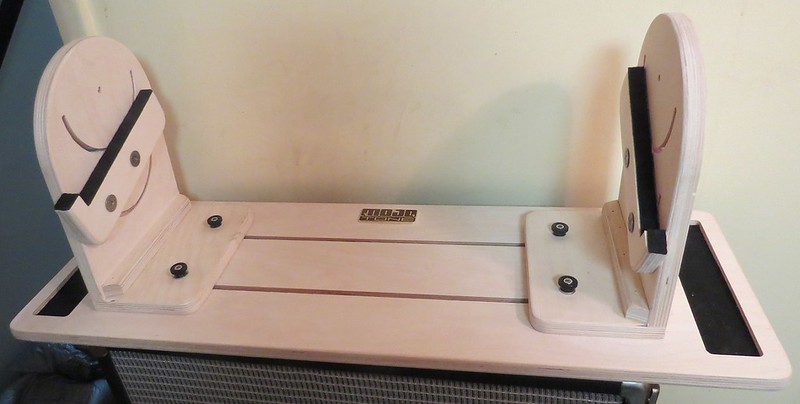 Hey Don - got any photos of these builds? Would love to see them if you have!

+1 on that -- always love seeing pictures of people's builds. 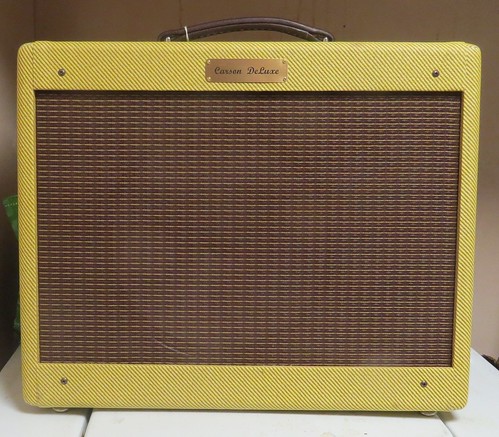 Don I love this type of project. Congratulations. I look forward to some soundbytes when it can be arranged.

Life, as with music, often requires one to let go of the melody and listen to the rhythm