This is for sale at a local shop here in LA. The shop owner says the guitar is a one off and was special ordered for a music video and said it was made within the last 10 years. Has anyone seen one of these before? If authentic, any idea of the value? He's asking $2k 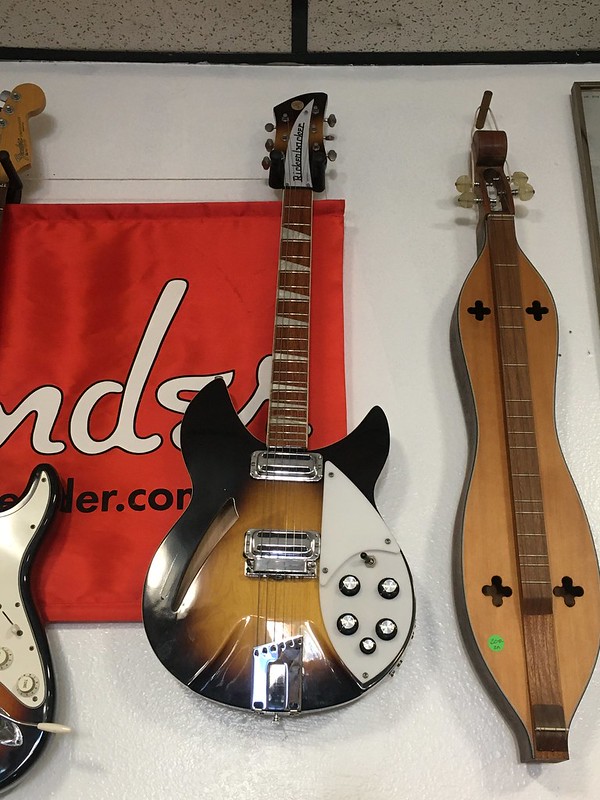 Wayulp, I’m just gonna offer my less-than-expert level opinion on that one.
Upon first glance, I like its look and dimensions…BUT…I believe I’m seeing certain things that make me wonder if she’s authentic.

Firstly: unless it’s a trick of camera light, there appears to be a finish issue by the cat’s eye that I’ve never seen caused by what causes dings, etc,
Secondly: said cat’s eye appears to be somewhat sunken. Once again, could be a light/camera thing.
Thirdly: the dish at the bottom seems a good bit wider than I’m used to seeing. Also deeper and with more pronounce ledges.
Fourthly: the top of said overgrown dish appears to be at an angle instead of parallel to the bridge along with a bit of a curve to it.
Fifthly: said bridge appears to be unusually close to the bridge pickup. In all fairness, could be for intonatability due to its short scale. It’d take a smarter fella than I to determine that.
Sixthly: the headstock’s shape kinda bugs me.

Does the mixer knob’s location look odd to anyone else? Like it’s too close to the bridge volume?
I haven’t paid much attention to the the tuners yet. Look to be Grover Sta-Tite-like affairs.
Does the jack plate look like it has 2 jacks?

So my vote is that it’s an (albeit rather cool looking) replica. I do like the tobacco-ish sunburst. Different from my 330 in Matte Tobacco.

I agree with Sam that there a re a lot of things "different than I would have thought to be, but, who knows. Not me, that's for sure.

Tell me more about the dulcimer, please. I could be interested in that.

How short is the scale length?
Top

I think it's fake and poor one at that. Tell the store owner he may have a counterfeit guitar on his hands.
Top
Post Reply
6 posts • Page 1 of 1