Apparently nobody is really interested in a report on what maybe was the first unofficial Dutch mini confluence and far more in pictures of Dutch cats (see the 4005 differences topic in the bas section.), but I'm going to give you one anyway.

Yesterday Sven, Chris and I came together to play eachothers Rick's. We met at my place as this was easiest (for me having 7 Rick basses and 2 amps). Alltogether we had 12 Rickenbacker's at my place. Chris had borrowed his 3000 to someone else. Offcourse we had coffee and spekulaas koek (Chris took cakes even without having coffee).

We played a lot on eachothers instruments and compared things. Things that I find worth mentioning Rickenbacker wise are:
Hopefully Sven and Chris can add to this short list of my findings...

Some pictures of the meet (sorry for non Rick content): 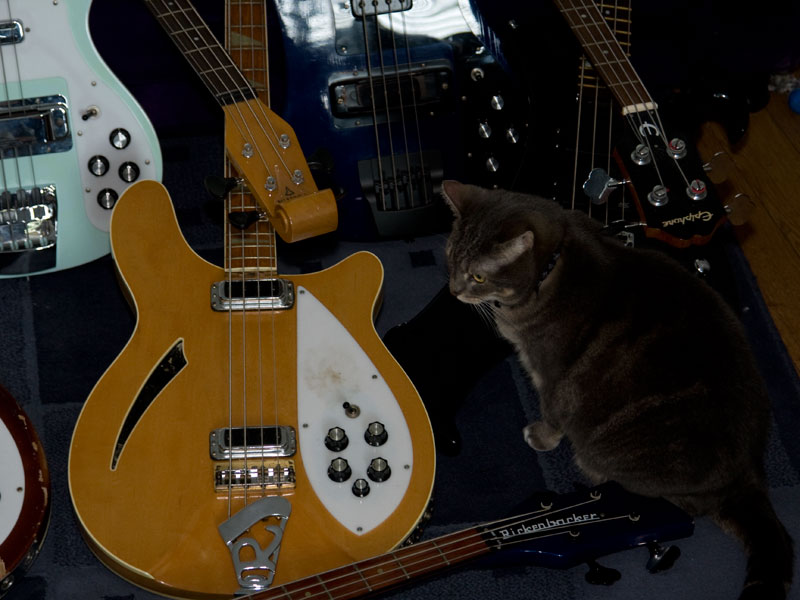 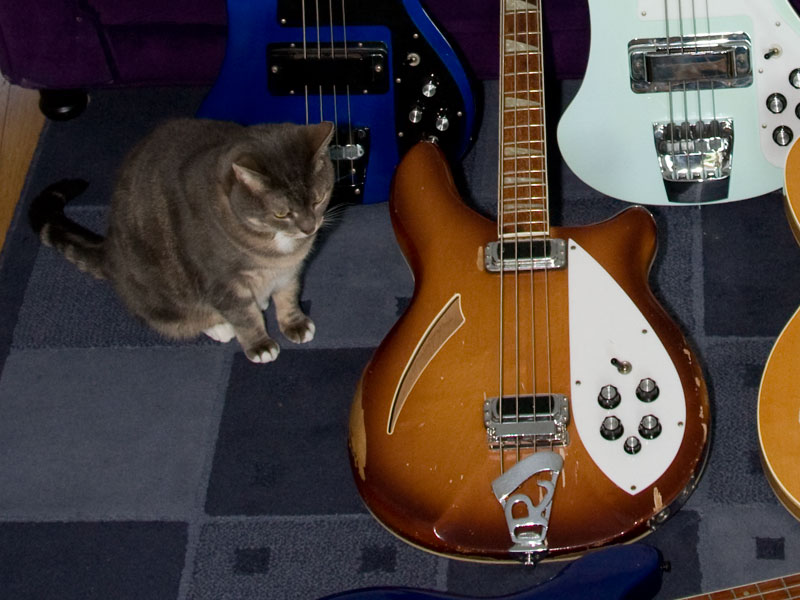 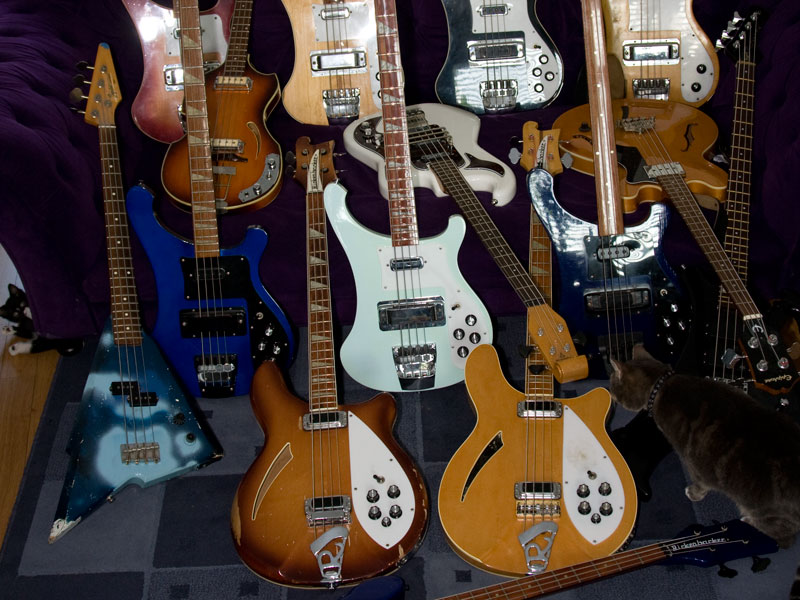 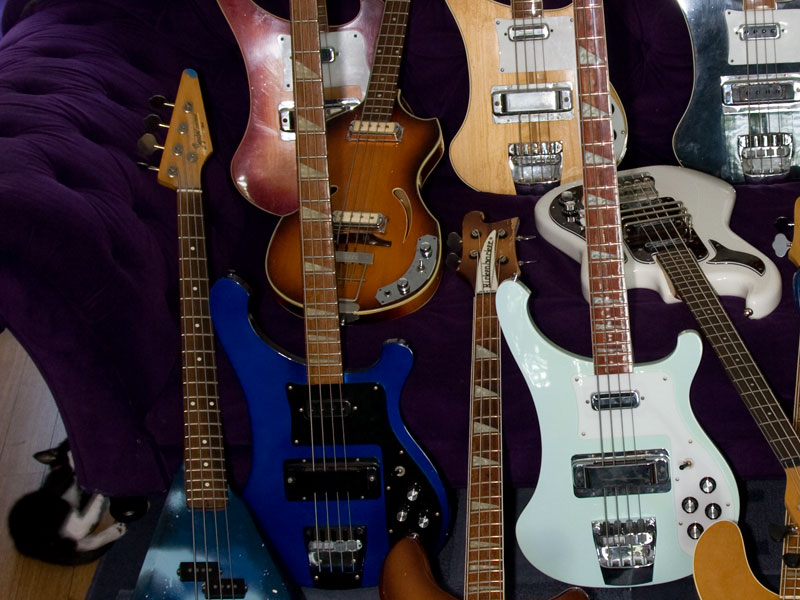 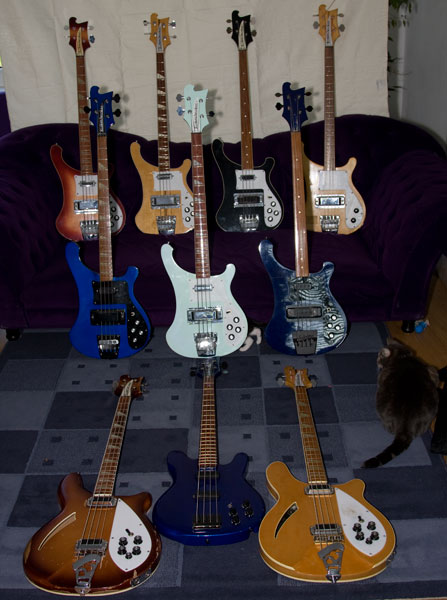 Bert, looks like you guys had quite a collection of great and vintage instruments. You probably also found out how much fun these get-togethers are. Love all the pictures. In the first pic, what is the bass with the carved headstock just above the 4005MG body?
Top

Who said we didn't care?

johnallg wrote:In the first pic, what is the bass with the carved headstock just above the 4005MG body?

I was just kidding.

Loving the 4005s and the Blueboy looks amazing.
Top

Of course we care about you!

Glad you guys had some Ricken-fun together.

Thanks for posting the pictures.
Any recordings to post of all these Ric basses going at it ??
Top

Great to see another mini confluence. Some nice gear there too!!

Thanks for sharing it with us, Bert!

"Never eat more than you can lift." - Mr. Moon
Top

Wow! Some cool basses there Bert. But where are all the skinny stringed instruments?

“We can't solve problems by using the same kind of thinking we used when we created them.” - Albert Einstein

winston wrote:Wow! Some cool basses there Bert. But where are all the skinny stringed instruments?

Yep, we had a great time!

Berth already pointed one of the surprises of the day: The neck of Berth's 4005 is set deeper into the body than on my WB. And with deeper I mean more to the bridge, so the overall lenght of mine is an inch more.

You would think a company like Rickenbacker would use as many the same parts and constructions as possible. Another thing was the sizes of the 'finger' on the headstock. The Blueboy had a much fatter finger.

But we just ahd a great day.

Yep, my 4005 has much more output, maybe because my electronics are messed up?
Top

Chris P wrote: Yep, my 4005 has much more output, maybe because my electronics are messed up?

Chris P wrote: Another thing was the sizes of the 'finger' on the headstock. The Blueboy had a much fatter finger.

If I had known that Bert allowed non-Rickenbacker basses in his house I would bring some more stuff with me, just like Chris did. On the other hand, then the couch would be too small. We completely forgot to plug in my ancient Coral bass amp, so we'll need to go back to Bert's place someday.
Chris' Warwick has the most impossible shape ever, it's even dangerous to play it when seated. Chris needs a roadie (or Loes) to tune it, because the tuners are out of reach. Bert's Klira violinbass is a lot of fun, I like the heavy sound from such a lightweight instrument. Bert also has a shortscale cat (it can be seen on the third and fourth picture) that sounds a couple of octaves higher than the standard cat.
Top

I was browsing through the ultimate guitar book of Tony Bacon today and in it is a Burgundyglow '78 4005, which seems to have the neck set exactly in the same way as on my WB.
Top
Post Reply
33 posts