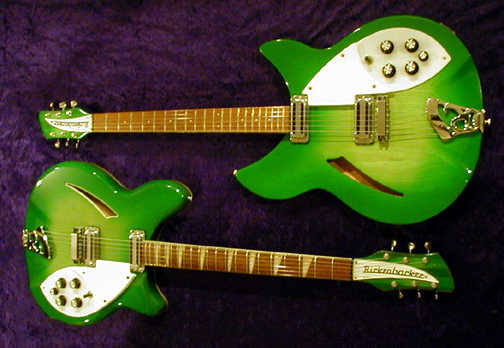 I ‘ve been collecting Rickenbackers for some time now and would have to say they are my favorite American made guitars.

About twelve years ago, I was studying music in college, and my music teacher posted a Rick for sale on the bulletin board outside the practice room. It was before class had ended, so I had to wait to ask him about it. As soon as class let out I inquired about it, and he brought the case out and opened it. My eyes popped out of my head! This was the 1967 Model 330. He told me that I was the first person he thought of when he posted it. I’d never seen a green Rick ever! I asked him if I could pay him at lunch, and he said as long as I wanted it I could pay him whenever. I had the money buy lunch time. He was selling it for a friend who was a jazz guitarist that just wanted to get rid of some extra stuff. He had bought it new in 1971 from a small music store in Milwaukee. He was told that the guitar had never been sold because people thought it was ugly. I guess everyone wanted Fireglow guitars, Beatle/Byrd colors. Makes sense. Regardless, I knew I had found something extremely rare.

I immediately started doing research, and because of the absence of the 1967 shipping records, I could only assume that this guitar is what the Rickenbacker book refers to as “shaded green.” That summer I took it to the Chicago Guitar Show, in Villa Park Illinois, and literally was attacked by several dealers and collectors. Dave Rogers of Dave’s Guitars, Nate Westgor of Willie’s American Guitars, Larry Hendrickson of Ax-in-Hand, and George Gruhn, all examined the guitar thoroughly and unanimously agreed its originality and rareness. They also bombarded me with offers I couldn’t refuse, but did anyway. For years after that many of the dealers remembered me as “The Green Rick Guy.” Kind of cool I guess.

It wasn’t until a few years later that I saw the 360 owned by Albert Molinaro (Guitars R Us) in the Bacon / Day book. I had a chance to visit his store in 1995 and see the guitar first hand. He said it was a ‘one of a kind’ and NOT FOR SALE! I had to break the bad news to him and tell him that I owned a 1967 330 in the same color. It could have been my imagination, but he looked a little deflated. His is still a one of a kind because all three are different models and different years. Anyway, I went about life for the next five years thinking that there were only two “Green Glow” Rickenbackers in the world, that is, until Ebay. The 1968 360 showed up on Ebay in mid September 2000. It was simply listed as “1967 Rickenbacker 365-C.” I couldn’t figure out what the “C” meant until the picture downloaded. I couldn’t believe it, ANOTHER ONE! I then remembered that my 330 has the same “C” after the model number in the control cavity. Keep in mind that these two guitars are about 6 to 7 months apart. I E-mailed the seller to asked him a few questions about it before I would do any bidding. It still had a few days to go, so I wasn’t in a hurry. He down loaded about six more pictures for me, and it was a lot easier to see that the colors of the two guitars are identical. He really didn’t know too much about it except that he got it in trade from the original owner who played it quite a bit. I believe he said that he was a professional musician for many years and that he was selling it to retire. His friend did a deal with him with the intention of selling it right away. So technically I’m the second owner of both guitars.

Anyway, I knew right away that this guitar was the sister to my 330. I had to have it. I did, out of curiosity, check out the Rickenbacker chat room and had to laugh at some of the amateur evaluations about this 360. I guess the consensus was that it was a poorly refinished bogus guitar. I think one guy referred to as “Maaco Green.” Granted, the downloaded picture of the guitar was pretty bad, but I had the other example right in front of me. I wasn’t about to argue with these experts. I didn’t want to convince them that it was real. I guess that because none of them had seen one before, they concluded that it couldn’t be real. I’ve never seen a T-Rex either, but I know they existed. Also keep in mind that Albert Molinaro’s Rick, is the only reference point.

Nobody, except for a few dealers, knew of my 330. I guess all I had to do was win the auction. I did. So that’s about it. I do have other tidbits of information, but this could go on for days. I do know of another Rickenbacker collector that gave me information about that color from a guy who worked for Rickenbacker in the sixties. He said that he knew of two “Green Glow” Rickenbackers that left the factory, but no more than five. Are there more? Who knows? We do know of three now.